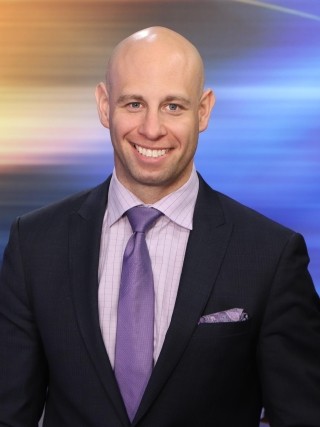 Aaron Perlman has been Bakersfield's morning forecaster for almost 10 years! He was voted 'Best of Kern Celebrity 2013` and has won several local awards for his forecasting and news stories. Aaron made national television with his audition of the FOX reality show So You Think You Can Dance. Sadly he never made it past the first round and neither did his new dance "The Weatherman Boogie."

Aaron arrived in Bakersfield after being the chief forecaster in Yuma, AZ with KSWT. A few short years later Aaron met his wife Mindy taking one of her kickboxing classes. She has since kept him "in shape" by losing 40lbs! Aaron has also lost his hair in the last ten years, too.

When Aaron is not on air you can find him visiting schools teaching weather to students of all ages with his Weather Roadshow program. Weekday afternoons his voice is heard on 88.3 Life FM where he co-hosts a show called the Afternoon Joy Ride. This way your Eyewitness News weather forecast can be up-to-date throughout the whole day! If that wasn't enough, hiking the John Muir Trail in the Sierra Nevada, leading music at his church and finding the next 5K or 10K to run will round out his day.