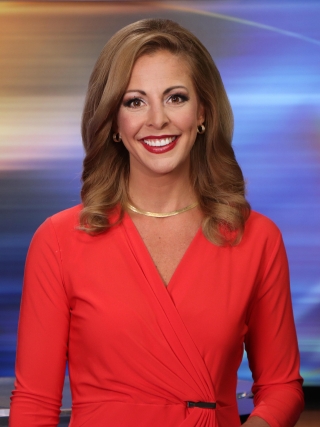 Thank you, Kern County, for inviting me in your homes every weeknight as I anchor the newscasts for KBAK and KBFX. I officially joined the news team in August 2015, bringing with me more than 15 years of experience, a few professional awards, and love for the job.

I am from Muncie, Indiana. That is where the journalism bug bit me and never let go. I was attending Delta High School. In my senior year in speech class, my teacher, Mr. Jones, told me I was a good storyteller. That's when he introduced me to radio and television production. I could not believe someone could get paid while having so much fun. I went on to graduate from Ball State University with a degree in telecommunications. It's hard to imagine I went from doing the morning announcements in high school on closed-circuit television to reporting from the White House, and traveling the country, from market to market, covering local news.

My career began at WISH-TV, CBS News 8 in Indianapolis, as an intern. From there, I moved cross-country to Kennewick, Washington, to become the weekend anchor and eventually the morning anchor for KNDU. There, I covered the massive Hanford wildfire. The fire spread across land belonging to the nuclear power plant where toxic waste was stored. It was the first story I covered that captured national attention. There I was, running my own camera while rubbing elbows with national correspondents from every network, all covering the story.

After three years in eastern Washington, Las Vegas came calling. I left to join the KVVU news team as the morning reporter and fill-in anchor. There is never a dull moment in Las Vegas, even when you are working. There, I covered some huge stories, such as the white tiger attacking magician Roy Horn during a live show, Britney Spears' hours-long wedding and annulment, and Michael Jackson shutting down the strip, travelling in his limo through the city after child molestation charges surfaced. I reported on these stories not only for Las Vegas, but for cities across the country, and even the BBC.

From the Las Vegas desert, I decided I needed some more moisture in my life. So, I joined the KOMO 4 news team in Seattle, Washington, for nearly seven years. While I started as the morning reporter and fill-in news anchor for the ABC affiliate, I transitioned to the traffic anchor, guiding drivers through the congested morning commute, while continuing to report on news.

After I felt I was fully hydrated again, in 2011, my husband and I moved to Bakersfield to be closer to family. My husband, Ley, is a Driller (once a Driller, always a Driller) graduating from Bakersfield High School. His parents and sister live in Frasier Park. I worked for KGET as the 6 p.m. anchor for four years before proudly joining the KBAK/KBFX news team.

I have been honored by being nominated for numerous Emmy awards, including my reports on Honor Flight Kern County. And, I have won multiple Emmy and Edward R. Morrow awards for my stations. But, the biggest compliment I can receive is from a viewer telling me that I made them laugh, cry, think or become motivated to make a change.

This community has shown me so much love, I try to give back as much as I can. I am an active supporter of many local nonprofits, including Honor Flight Kern County, Links for Life, Wounded Heroes Fund, the Bakersfield SPCA, and the Housing and Opportunity Foundation of Kern.

In my spare time, I am a want-to-be "Iron Chef." The deal is my husband cleans up after I see what new creations I can come up with in the kitchen. So, it's a good thing I also enjoy running to burn off some of the calories. I also do all of my own yard work. I take pride being covered in dirt and clippings while looking at my freshly cut and edged grass (You can take the girl out of Indiana, but you can't take the Indiana out of the girl). I am a big NFL fan. Sundays during the season are reserved for football, guacamole, hot wings and reubens. And, it should come as no surprise, I am a huge Colts fan. But, my favorite thing is spending time with family, including my beautiful step-daughter and step-son, dogs Tinkerbell, Rockie and Charo, and cat Gypsy.

You can learn more about me and my life on and off the camera by following me on Facebook and Twitter.